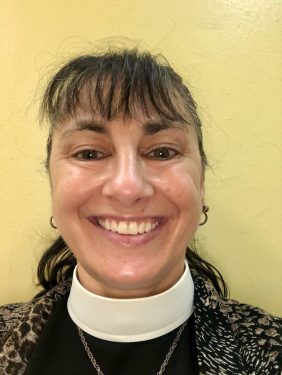 Dawn-Victoria was born and raised in a suburb just north of Boston, Massachusetts, then lived in Missouri for a total of almost 22 years. In fifth grade, she began attending the small United Methodist congregation where she had been baptized as an infant. She came to the Episcopal Church during her studies at St. Paul School of Theology in Kansas City, Missouri, and credits her four years at an all-girls Roman Catholic high school, together with John Wesley’s emphasis on the Eucharist, for bringing her into The Episcopal Church. Dawn-Victoria is an avid student and lover of Episcopal liturgy.

Dawn-Victoria enjoys reading in her downtime, particularly classics of English literature such as Jane Austen, William Shakespeare, and Charles Dickens and mysteries by Agatha Christie and Louise Penny. She also enjoys walking and being outdoors, and considers international travel a passion. She has been to the Holy Land, England, Greece, Rome, Paris, Spain and Portugal. Her favorite travel, though, is her visits to spoil her three nephews, two nieces, and great-nephew and great-niece. She is owned by a cat, a Bombay named Shalimar.
​
Shel is currently working on a D.Min in Congregational Growth and Development through the Bexley-Seabury Seminary Federation in Chicago, IL.